Early in Don’t Worry Darling, Alice (Florence Pugh) diligently cleans her picture-perfect suburban home in a stylish print frock protected by an equally chic floral apron. Every detail in Olivia Wilde’s much-discussed second feature, from the manicured lawns to the beautiful dresses hanging on the clothing line, is a snapshot of the idyllic Victory community.

“This is postwar American idealism when women were glamorous housewives,” costume designer Arianne Phillips tells ELLE.com about the Don’t Worry Darling aesthetic. At Venice, Phillips received the Campari Passion for Film Award for her collaboration with Wilde on the film, and this partnership is one she talks about fondly. The designer is no stranger to midcentury sartorial flourishes, receiving Oscar nominations for her work on Walk the Line and Once Upon a Time… in Hollywood (she was also nominated for the ‘30s-set W.E.). “I am attracted to these very American stories. I am attracted to the time period,” she says about this recurring theme and the “wealth of riches” of midcentury design.

Phillips isn’t interested in repeating previous work, so location, storylines, and genre vary greatly in her resume. Unlike Johnny Cash's biopic Walk the Line, this setting is fictitious. “We got to take a lot of liberties because we were creating the world we wanted to—Victory. Because the story is multilayered, and things are revealed, it also gave us cinematic license to break the rules,” she notes.

On paper, Alice and Jack Chambers (Styles) have a dream life, but their marriage is threatened when Alice starts to ask questions about their community. Here, Phillips talks about hitting it off with Wilde and collaborating with Pugh and Styles. Plus, she shares the challenges of designing period costumes early in the pandemic, the film’s intricate details, and the significance of the male gaze and clothing in Don’t Worry Darling’s off-kilter period environment.

“Don’t Worry Darling exists in the world of Palm Springs in the ’50s, which is all about the pool and the desert,” Wilde recently told ELLE.com. During this conversation, she references Phillips’ collaborations with Madonna and her extensive design work on Broadway and in film. The designer recalls Wilde reaching out to her at the end of the Once Upon a Time production, and their first meeting at a Los Feliz restaurant was “like having a first date.” The affection for each other’s previous work was mutual. “I always love to see artists crossover into other disciplines, and I always think the best directors are directors that have either taken acting classes or are actors,” Phillips says. 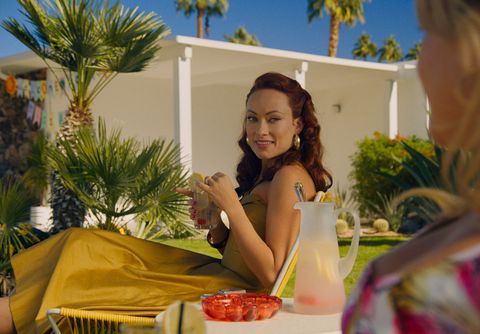 Going from a coming-of-age comedy Booksmart to a feminist thriller is quite the tonal shift, but when reading the Don’t Worry Darling script, Phillps saw a link to Wilde’s activism. “The movies they choose to make says something about the filmmaker,” Phillips says of working on Wilde’s Booksmart follow-up and with Tom Ford and Madonna on directorial debuts, A Single Man and W.E.

Phillips got “another layer of intrigue and excitement” when Wilde “sent me a mood board of her vision.” This pitch deck “had all these sophisticated visuals” that tapped into Phillips’ “photography-based” sensibilities (you can see the costume designer’s work in the September issue of ELLE). “I started out working in fashion because I love working with photographers and still photography,” says Phillips. Wilde’s visual mood board kicked off this creative love affair that included Slim Aarons and contemporary artists like Alex Prager.

When the pair first met in 2019, Wilde was going to star as Alice. “I think her goal was always to have Florence, and then Florence became available,” she explains. Wilde still pulls double duty playing Alice’s next-door neighbor Bunny, who wears daring leopard print bikinis and strapless mint green dresses. As this is still a substantial role, Phillips had to consider elements such as wearing a wig, makeup, and heels as she did when designing costumes for Hedwig and the Angry Inch. “John Cameron Mitchell was literally in drag—directing and acting. Olivia, it's pretty much the same thing, right?” Phillips recalls. “I knew it was going to be important that as her costume designer, I could also be a support to her. Not only behind the camera but in front of the camera because it's a massive job.” 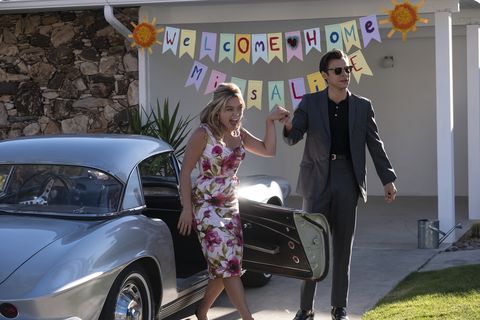 “She taught me so much about vintage fashion,” Wilde said about working with the designer on Don’t Worry Darling. Preproduction was slated for March 2020, then pushed to the summer of that year due to the pandemic. Phillips adapted to the unique circumstances and uncharted territory as it was one of the first movies to come back and resume filming. “There weren’t as many resources available to me as normal. A lot of places were closed, whether it was museums, libraries, or flea markets—my usual journey of hunting and gathering,” she recalls. Luckily, Phillips could still source “a substantial amount of vintage sourced costumes from costume houses.” She also connected through domestic and international vendors online to “create a wish list of what we're looking for and get boxes sent.”

In addition to vintage pieces from costume houses, Phillips “made most of Florence's costumes out of vintage fabric from the period, as well as Harry’s suits that we tailored.” Whereas sourcing the pieces and fabric to custom build was a challenge, Phillips wanted to maintain the quality and authenticity that has made her in demand. “Like most of the films I do, I always like to have sourced clothes from the period because it’s hard to recreate that touch and feeling.” 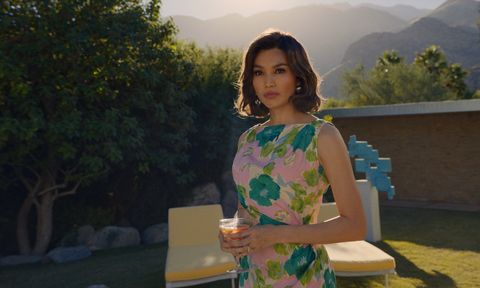 “It was not only challenging in terms of the supply chain, timing, sourcing, hunting, and gathering but also connecting with the actors themselves and with the other crew because everyone is masked,” Phillips remembers. Even with the additional steps (they sanitized clothes before and after fittings), Phillips speaks positively of the experience, despite what recent headlines might say. She feels “incredibly bonded and close to the cast and crew on this film more so than ever before.”

One such fruitful collaboration is with Pugh: “She was incredibly open, and she brought a lot of good ideas in our early conversations in the fittings.” The designer highlights Pugh as “generous with her time” as “you never know how much costume is part of their process because every actor is different.” The fitting room can help build a character as “costumes can help catapult someone to a certain time and place.” Phillips notes that British actors traditionally prefer “a physical, tactile approach to accessing the character,” whereas American actors are typically more “unique whether or not that helps them.” 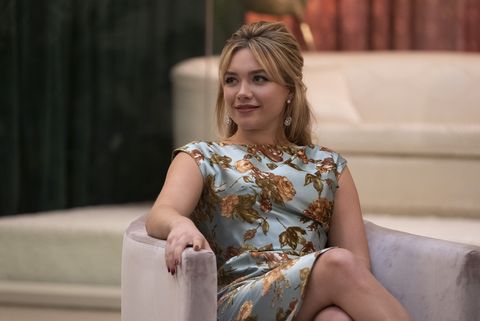 Floral and graphic print frocks are not the only thing in Alice’s closet. She also borrows one of her husband’s white button-downs for a sexy breakfast moment that purposefully winks at this recognizable flirty trope. In addition, capelets, ballet attire, gingham swimwear, a black eyelet dress, and a formal pink gown chosen by her husband are all part of her sartorial journey. “Colour and silhouette are always my first approach when designing, especially in this period,” Phillips says. There is also a nod to how legends in the field like Edith Head and Elois Jenssen created miniatures of costumes worn by Joan Fontaine and Lucille Ball. “Midcentury film design is built into literally the way Victory is designed. You see the little mini model that is a prop in the movie,” Phillips describes.

“Harry, like any actor, when he walks in the fitting room, any persona or public perception of who he is, goes out the window,” Phillips says about working with Styles the actor, rather than Styles the musician. “The only thing I would say about his public persona that I imagined would be exciting to work with is that he takes chances in his own world with how he dresses and expresses himself,” she reflects. 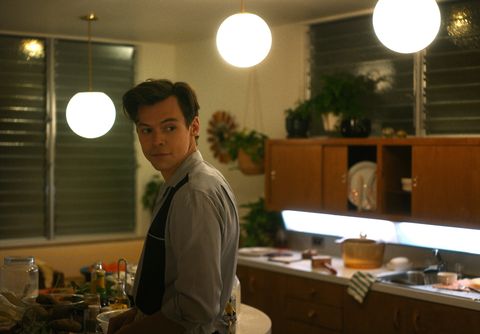 After working with A-list artists like Jennifer Lopez and Gwen Stefani, Phillips had an idea of what to expect from Styles. “I felt intuitively that he would be a very open person, and indeed he was. He was game and up for the ideas, very curious. I love to have these bigger character conversations with the actors, these philosophical conversations.” One thing we can all agree on is Harry “looks amazing in clothes, he wears clothes great. It was fun to watch this character come to life in the fitting room with him.”

“It’s a great time for menswear,” reflects the designer. That’s also evident in Chris Pine’s costumes. As the charismatic Victory community leader Frank, Pine’s wardrobe points to his figurehead status, such as the luxurious monogram on his cuffs. “Chris is very thoughtful, detailed, and had a lot of good ideas about his character,” she says. “He knows a lot about the period and is an aficionado for cars and dress.”

A coveted accessory in Victory is a signet ring. “I learned a lot about the signet ring from working on a couple of Kingsman movies,” Phillips says about the British tradition. “It's more unusual in America, yet we leaned into this kind of bro culture, this Rat Pack early ‘60s, when ‘men were men and women were women’ quote-unquote,” explains the costume designer. Don’t Worry Darling purposefully utilizes the male gaze for both men and women in the film: “They’re this idealized Rat Pack culture. There is an elegance in the way the men dress in the ‘60s. We’re leaning into that veneer and facade of presentational dress for men and women—and the social expectations of women at that time.”

Clues in the Costumes

Building this fictional world allowed Phillips to be “an architect of sorts” in pulling from authentic sources and collaborating with other department heads. “Katie Byron, the production designer; Matthew Libatique, the cinematographer; and Olivia and I were constantly referencing design from the period that was relevant to the story we’re telling,” she says.

Without going into specifics (because spoilers!), Phillips teases how costume and her ability to take cinematic license play in the unfolding narrative. Victory’s “veneer of artifice” is familiar to contemporary audiences who have seen the midcentury design and advertising, but this isn’t a historical drama biopic that requires note-perfect accuracy. “That license I was able to take in design also adds to a certain story layer as the story becomes revealed,” she says.

Fashion is cyclical, and retro silhouettes have a romantic allure. Still, Wilde’s movie and Phillips’ costume design dig deeper into social expectations behind this put-together appearance: “It’s just a couple of generations ago, but [these were] societal norms, the way that women were expected to dress to please their husbands.” Phillips also reflects on how Don’t Worry Darling will resonate within the fraught landscape in the aftermath of Roe v. Wade being overturned. “My great hope is, the movie will entertain everyone and provoke conversation—I think those are the best movies. We’re living in dangerous times when we talk about control over women’s bodies and these gender roles that we’re expected to play—it’s a cautionary tale.”

Emma Fraser is a freelance culture writer with a focus on TV, movies, and costume design. You can find her talking about all of these things on Twitter.