Style Points is a weekly column about how fashion intersects with the wider world.

The fashion moment that seemed to galvanize the most people this season didn’t take place on the runway. When, on what happened to be the last day of New York Fashion Week, Patagonia founder Yvon Chouinard announced that the eco-minded outdoor giant would be investing almost all of its shares into an environmental nonprofit, stating, “Earth is now our only shareholder,” my feeds exploded with an enthusiasm that exceeded any I’d seen for the latest turns on the catwalks.

Given that we’re currently dealing with the overturn of Roe v. Wade and a proposed national abortion ban, an ongoing climate crisis and pandemic, war in Ukraine, and potentially history-making midterms stateside, you might have thought that political statements on the runway would abound. But the majority of collections felt like business as usual. There were, however, some designers who used their platforms ingeniously, in ways that extended far beyond the confines of fashion week. 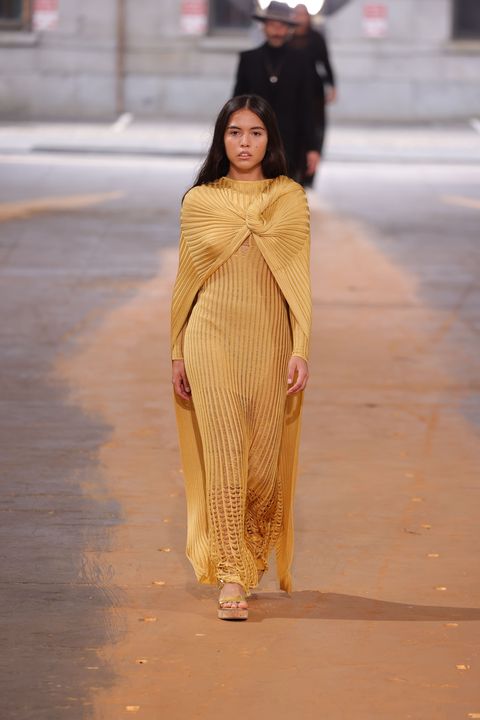 Chief among them was Gabriela Hearst, who cast notable women, including climate activist Xiye Bastida and former Planned Parenthood president Cecile Richards, to walk in her show. The collection, inspired by the poetry of Sappho and the artwork of Imi Knoebel, was soundtracked by a performance from the Resistance Revival Chorus, which describes itself as “a collective of women + non-binary artists + activists who sing in the spirit of joy & resistance.” And, in keeping with Hearst’s green philosophy, the collection incorporated deadstock and upcycling, as well as an offsetting partnership with Climeworks. 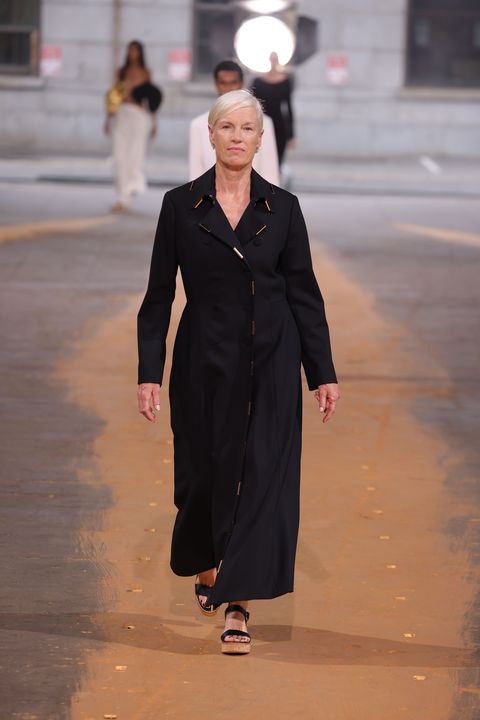 Imitation of Christ has been doing fashion-shows-as-happenings (a fashion funeral, a skate park jamboree) since its beginnings in 2000. This season, in lieu of a show, the recycled clothing-based label held a protest with New York Communities for Change. Models and climate activists gathered outside Senator Chuck Schumer’s home with signs and clothing reading “Oil Is Death,” in protest of the politician’s deal with Sen. Joe Manchin that would result in the construction of new oil pipelines. 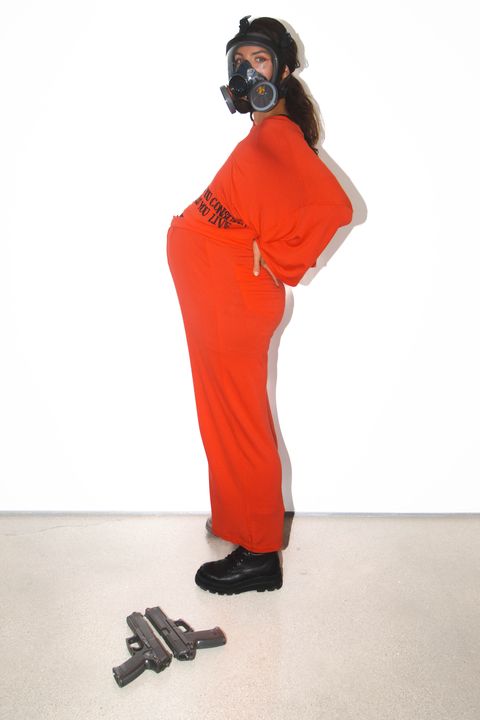 A look from Imitation of Christ’s spring 2023 collection.
Courtesy of the designer.

The collection itself touched on another hot-button issue: reproductive freedom. Designer Tara Subkoff spoke of a recurring nightmare she’s had since the Roe news. “I had to make art about it and create this image,” she said, “as I am terrified that this is what the future holds for women in this country, unless we are able to speak out.” “This” being the dystopian post-Roe vision of her lookbook and collection video: women wearing pregnancy prosthetics, accessorized with gas masks. 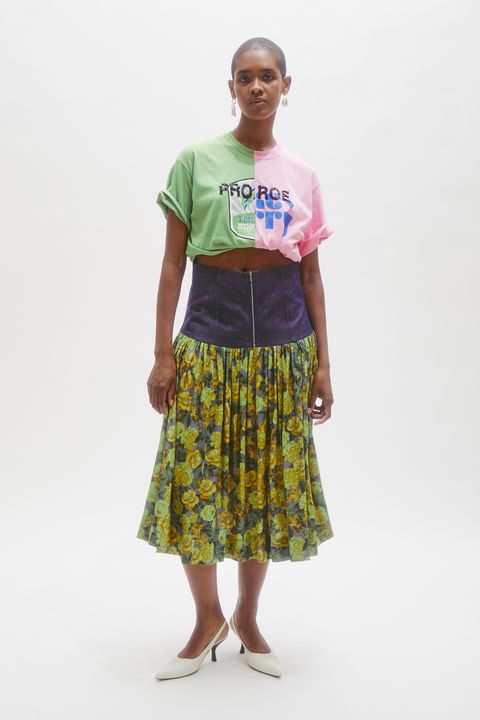 A look from Rentrayage spring 2023.
Courtesy of the designer.

Erin Beatty of Rentrayage showed an Alice in Wonderland-inspired collection of pieces made from her standbys: deadstock fabric and vintage clothing. Along with the environmental statement, she made one about reproductive rights, in the form of stitched-together T-shirts that read “Pro Roe.” In this moment, she said in her show notes, “The role of fashion feels intentionally delusional. Not that that’s a bad thing—now, more than ever, fashion should be an escape, a joy—still we must acknowledge the weirdness of it all. For spring we focused on joy with a side of surreal.” 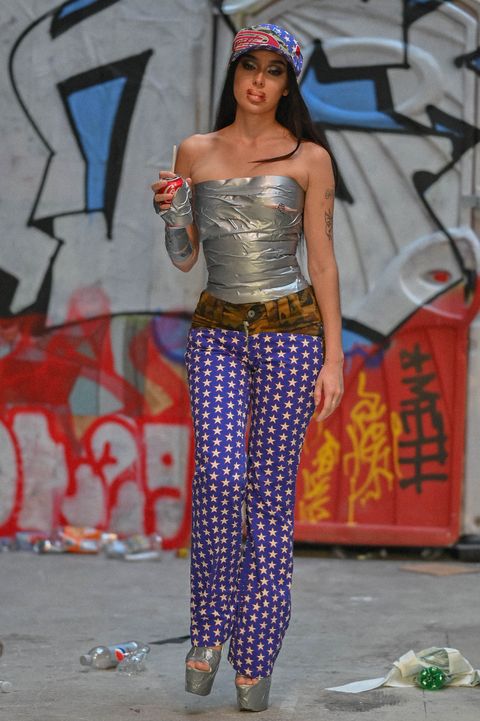 “Surreal” could also be applied to Victor Barragán’s spring offering, which marked the designer’s return to New York Fashion Week after a three-year absence. Titled “DESPUÉS DEL CAOS VIENE LA LUZ” (AFTER CHAOS COMES LIGHT), the collection drew on unexpected territory, from Woodstock ’99 to contemporary border politics. The designer called it “a post-Covid critique of American BACK TO BUSINESS culture, including its entrenched culture of whiteness,” complete with an all-white cast of models. He riffed on American hyper-patriotism and capitalism with slashed-up suiting and empty briefcases, camo and dollar bill prints, and double-take-generating statement Ts (one read “Canceled twice.”) Duct tape, which had a brief fashion heyday in the aughts, evoked not just that era, but also the idea of a spackled-together, failing state. And just as he has in previous collections, Barragán blended cultural influences: For instance, his native Mexico was present in fùtbol jerseys that evoked hand-me-downs he received growing up. 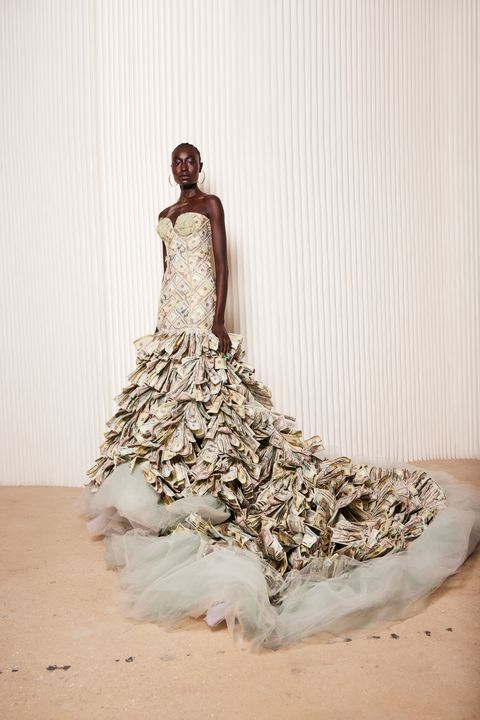 At Fe Noel, the final look was an attention-getter. A waterfall of paper money and taffeta, it was meant to raise awareness of a less-discussed gender pay gap: the 30 percent difference between men’s and women’s retirement income. (The look was part of a partnership with TIAA.) In a time when we’re re-examining women’s relationship with work, it was a refreshing update to the traditional fashion finale of a sweeping bridal gown.

Gianluca Russo on The Power of Being Plus Size

Lingerie Enters Its Age of Innocence

How the Shorts Set Became the Boss of Summer

Can Officewear Ever Be Cool?

Can Labor Activists Be Style Icons?

Rag Report Explains It All