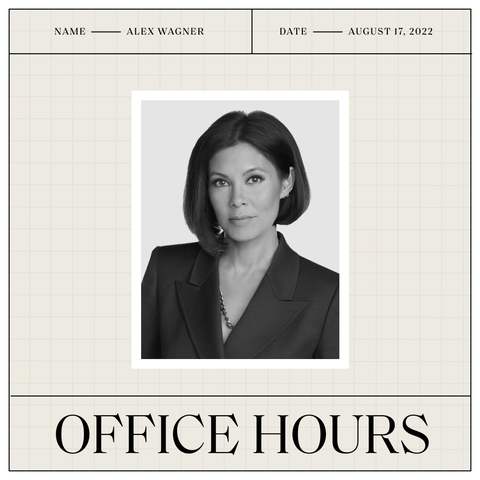 In ELLE.com’s monthly series Office Hours, we ask people in powerful positions to take us through their first jobs, worst jobs, and everything in between. This month we spoke with Alex Wagner, the seasoned journalist and author whose two decade-long resume reads like a well-rounded media diet: She’s been the editor-in-chief at The Fader, a senior editor at The Atlantic, an anchor at CBS News, and the co-host of Showtime’s documentary series The Circus—not to mention previous positions at Center for American Progress and George Clooney’s humanitarian organization, Not On Our Watch.

Now, Wagner is back at her old stomping grounds at MSNBC (she hosted Now With Alex Wagner there from 2011 to 2015), where she’ll be taking over for Rachel Maddow during the coveted 9 p.m. hour Tuesday through Friday on Alex Wagner Tonight. “There was never a moment’s hesitation,” Wagner says about accepting the role. “I really do think of it like a dream job.” Below, the newly-minted primetime host shares her goal for the show, the advice that’s carried her through her years in media, and the one job she’d never do again.

My first job where I got paid any money was babysitting, and I took it extraordinarily seriously. The Washington Post had a section called “Hints From Heloise,” and it suggested that babysitters should bring activity kits when they babysit because it will give the kids something to do. So when I started babysitting when I was 13 or 14, I would come armed with these. I had a whole art kit, all kinds of little toys and games that I would bring with me, because I thought that’s what babysitters did. I feel like it became my calling card in the neighborhood; I had honestly more business than I could handle. I was overly prepared, and I took it really seriously, and those are all good things, but in retrospect, I probably didn’t need to try quite as hard as I did.

I worked at a place called Burrito Brothers in a food court in high school. I didn’t even have the responsibility of rolling the burritos and putting them in a bag. All I did was, at the end of the sale, I would be the person by the condiments and the napkins saying, “Would you like jalapeño peppers or hot sauce with that?” I counted once, and I said it 576 times in a day. Being in the service industry teaches you a lot. It makes you resilient. But I think that the proper word for that job is hellacious.

When I knew I wanted to be a journalist

In fifth grade, I designated myself the restaurant reviewer for our elementary school paper. Basically when my parents took me to Armand’s Pizzeria, I would review the deep dish cheese. Then I was an editor at my junior high school paper. That’s definitely where my interest took off. It really excited me to be one of the people that helps process what happened in the world or at school, and the responsibility and the privilege of being an interlocutor between the reading public, in this case my junior high school peers, and the events of the day. We would go to this terrible, musty old printing place, and me and my best friend, Kate, would eat these awful, awful potato chips and lay out the newspaper. I just remember being so excited by that whole editorial process. So I always wanted to be a journalist. I’ve had stints in other places, but there’s a throughline of the human story that’s been central to everything I’ve done.

How being a first-generation American has influenced my career

My mom comes from a place, Burma, aka Myanmar, which is deeply, deeply troubled. It was never lost on me that I could have grown up there and not here. I never forgot the privilege of growing up in America; the freedoms that we have here, including, and especially, the freedom of the press, is something I cherish very deeply. It’s always been so hard to get news out of Burma, and I tip my hat to all the journalists who work underground trying to shine a light on what’s happening in the country. Knowing the difficulty of reporting on events and abuses of power in Burma I’m sure pushed me to want to invest my life in being a reporter and a journalist myself. I think a lot of people who immigrate to this country understand the uniqueness and the possibility of what America promises. There’s a certain hope and optimism that my mom endowed me with that I carry, especially in complicated, difficult times, like the ones we’re experiencing now politically.

The way I know I’m in the right job

On my first day covering the White House for AOL’s Politics Daily, the veteran journalist Lynn Sweet walked me through the front gates, and she said, “Take a look at that White House, kid. If you don’t get a shiver down your spine every single time you walk onto the North Lawn, you’re in the wrong profession.” And it’s true. If you don’t feel a special tingle when the floor director counts you down—“Five, four, three, two, one”—and you’re live on air, you are in the wrong profession. The minute I don’t get that surge of electricity, and I’m not feeling incredibly grateful for the job that I do, then I think that’s the minute I should probably hang up my spurs.

It’s so hard to believe that could be the case in 2022, but apparently it is. I feel an enormous amount of responsibility to an entire community of people who have been woefully underrepresented generally and, specifically, in the news industry. You can bet I’m going to take that honor and try and do right by this community and make sure that their stories are covered in a way that they should be.

My goals for Alex Wagner Tonight

It’s an extraordinary time to be a journalist, because the stakes are so high, and the news is so urgent. We want to tell people what happened that day, but because the moment is so schismatic and confusing and unnerving to a lot of people, we also want to offer them some analysis about how to process all of this. Helping people understand how they can navigate these changing times is really critical. We all need it to stay sane.

This interview has been edited and condensed for clarity.

How Lo Bosworth Took Control of Her Own Narrative

Michaeline DeJoria on the Importance of Efficiency

Dr. Jane Goodall on How to Remain Hopeful

Karine Jean-Pierre on the Power of Being Shy

How Marielena Hincapié Embraces Her Background

YA Author Sabaa Tahir on How to Fight Burnout