On Saturday night, Rihanna was seen in New York City with her boyfriend A$AP Rocky on an evening out together at the Rolling Loud Festival afterparty at 42 d’Or. The beauty mogul was wearing a tight grey mini dress that ruched around her waist with a halter neckline. Over the dress, she wore an oversized jacket in matching grey material with black and tan design details.

Rihanna wore a pair of her signature dramatically high leather boots in black, the tops reaching all the way to her thighs. For jewelry, she wore some of her diamonds, including a necklace and large earrings. For makeup, she had one shimmering eye shadow and dark lipstick. Her hair was up in a long ponytail, with her newish bangs swept to the side.

She and A$AP were holding hands, giggling together, and he leaned over to whisper in her ear in front of photographers. The rapper was wearing jeans, a black Yankees hat, and a long-sleeved white t-shirt printed with large Gummie Bear graphics in green, pink, and yellow. 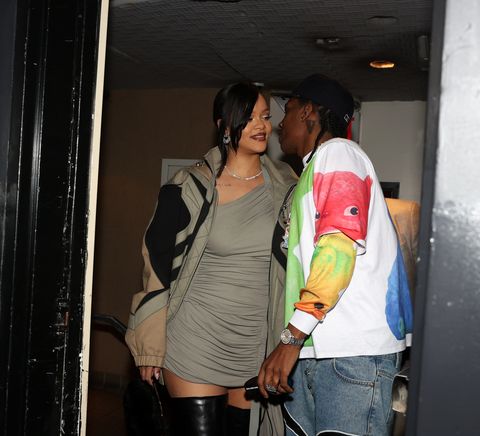 The new parents have not been out much since the birth of their first child, a baby boy, in May of this year, but they have stepped out for a few select events. An insider told People soon after the delivery, “Their baby boy is healthy, and Rihanna is just in awe of him...Rihanna barely leaves his side. She is a fantastic mom.”

The musical artist was recently seen coming in and out of the studio in Los Angeles, leading to rumors that she might finally deliver on longstanding promises of a new album. It has been six years since her last album ANTI was released. But, A$AP Rocky was also present, so the studio sessions could have easily been production work on the rapper's next album. Time will tell who is releasing new music first.

Why Leo Is Ready to Date Someone Over 25