On Saturday, Priyanka Chopra and her husband Nick Jonas made an appearance at the Global Citizen Festival. It was the 10th annual Global Citizen concert and held in New York City's Central Park. As the couple met on stage they shared a big kiss in front of cheering fans.

Chopra wore a blazer with the sleeves rolled up and matching pants with cargo pockets. The suit was cut from a vivid fabric in bold colors. Under the jacket, she wore a cropped t-shirt in white and red with the Global Citizen logo. She paired the outfit with some bright white Nike Air Force 1 sneakers, and left her long hair down.

Her husband was in hot red, wearing a button-down shirt, matching slacks, and black shoes. 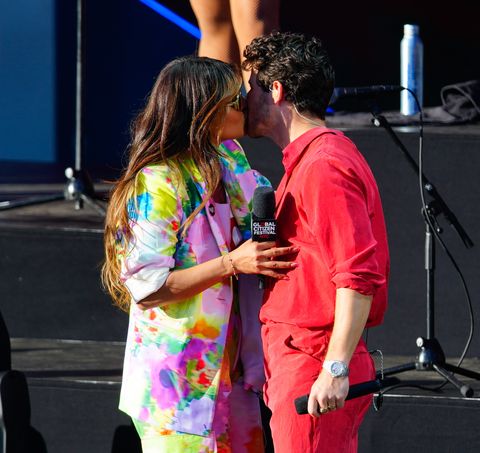 The festival began in 2012, and includes performances from popular music artists. It's meant to bring together “Global Citizens, artists, activists, world leaders, philanthropists, and corporate leaders,” according to their website. It generally takes place in conjunction with the UN General Assembly. This year, in addition to the Jonas Brothers, musical acts included Metallica, Charlie Puth, Mariah Carey, Mickey Guyton, and Rosalía. Chopra was serving as a host throughout the event. The organization's three goals are broadly to defeat poverty, defend the planet, and demand equity.

This year, the group stated they would specifically “call on world leaders at the United Nations General Assembly and ahead of the G20 and COP27 in November to step up and invest $600 million into the future of women and girls, close the annual $10 billion climate financing shortfall, deliver $500 million to help African farmers respond to the global food crisis, and provide urgent relief from crushing debts to End Extreme Poverty NOW.”

Chopra and Jonas share a baby daughter named Malta, who has been making more frequent appearances on their Instagram timelines lately. The couple is still very sensitive about her privacy, as more and more celebrities have been about their children. But Chopra can't resist occasionally sharing a glimpse of her from behind or of her tiny feet, though her face always remains respectfully hidden.

Why Leo Is Ready to Date Someone Over 25